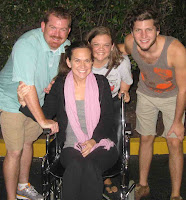 I had a little pocket of grace Sunday nite.
I felt good.
I had to get out of the house.
Charles, Mikey and Melody took me to ride the Sky Wheel.
Just driving there I was ecstatic.
I couldn’t believe I was out of the house.
At nite.
For fun.
The first time in months.

I couldn’t stop smiling that big cheesy grin.
You know the kind that hurts your cheeks and shows your gums. 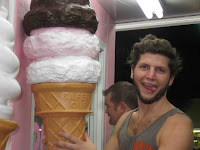 The colors on “The Boulevard” overwhelmed me, as did the tourists with their barely clad sunburned bodies. 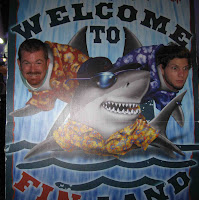 Neon came at me from every direction, horns blaring their oddly disharmonious sounds. Loud indistinct music intermingled with different languages and interesting accents, like a modern day tower of babel assaulting my freshly awakened senses. Inviting voices yelling at one another from one street corner to another, attempting to grab the attention of the opposite sex with their micro minis and bulging biceps.

Wow now I do sound old. Our only dilemma, as we wheeled haphazardly down the blvd was Melody’s absolute dread, terror, nay I say petrifaction at the mere mention of heights. Just the thought of the Sky Wheel brought her to her knees with tears to her eyes. She could barely keep one foot moving in front of the other. We tried to keep her laughing, but most of our our attempts at humor fell on deaf ears. The one and only thing that kept her in the game was the fact that I was more like myself than she’d seen in ages.

When we got there Mikey took the reins and pushed me up the zig zag ramp, trying his very best to increase his velocity. Unfortunately, my puny weight overcame his absolutely - it must be said - punier quadriceps. Turning, what was meant to be, in his words, “a roller coaster ride,” into the kiddie train at the mall. (Sorry Mikey, I love you, but the truth must be told.) 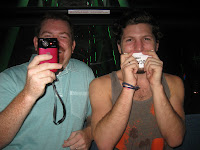 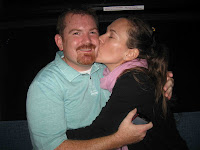 Glass on all sides made the views amazing - especially the one I had of the same exact ferris wheel just down the street. I was so ready to ride that one next, until Charles pointed out to his sweet, delirious wife that she was looking at a reflection of the very wheel we were on. 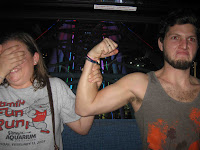 Melody kept her eyes shut 95% of the time, opening them for split seconds at a time to be in pictures or to catch a glimpse of the Blvd. Her very favorite part, besides the part when we exited, was the cold AC in the pod. Before the doors had even opened she was outta there like greased lightning, in a flash, posthaste, like a shot, in nothing flat. I'm telling you, if she could have said "Beam me down Scotty" she would've been out of there before we even started.  I'm so proud of her for going, she made me laugh, even with her eyes closed. 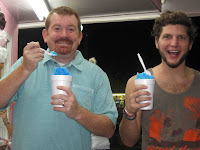 Afterward, Charles and Mikey were determined to find shaved ice. They were like two little kids, skipping down the street, darting in and out between the sunburn striped tourists. When they finally found it, you would've thought they were 10 years old. Charles was jumping up and down like he'd just won a pony. Definitely one of the highlights of the nite. They couldn't eat it fast enough. 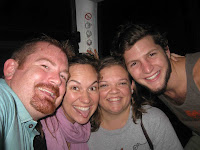 For sure. the ride was fun, and just the trip out of the house even better. But the best part of all was the company. The four of us together can’t stop laughing for a second. I am so thankful for friends like these. From Melody facing her fears, to Charles' crazy antics, to Mikey giving his quads a good workout - laughter is the best medicine. I love being with them!

Thank you sweet friends for such a great nite! I haven't had that much fun since I can remember!