This is an excerpt from the book "Growing Stronger" by entertainer Thalia. As I read it, I was overwhelmed, I felt like she was recounting my life. Almost every word of her story follows mine, (other than the whole being famous, selling more than 40,000 records, and dancing with President Obama part.) Seriously though, my deep, deep prayer, as you read this, is that it will give you greater understanding into this devastating disease and my journey in particular. 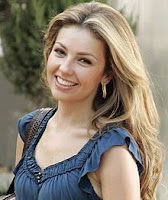 The Mexican-born entertainer who goes by the single name of “Thalia,” is one of the most famous Spanish-language singers in the world. She’s sold more than 40 million records, has starred in “telenovellas” (soap operas) shown around the world, had a lavish storybook wedding to prominent music executive Tommy Mottola, has sung at the White House and danced with President Obama. In the midst of all of that activity, in 2008, she came down with Lyme disease. Thalia devotes a chapter to the harrowing experience in her recently released memoir, “Growing Stronger.”

The singer started feeling ill near the end of her first pregnancy. After the birth, Thalia’s health really crashed, and she was incapable of caring for her newborn daughter.
Her doctors attributed her symptoms to post-partum depression. Thalia thought something else was going on. “They didn’t care what I said,” she writes. “It was as if I was talking to a wall.”
Nothing her doctors gave her helped at all. “I continued to feel like I had been run over by a truck that had dragged me for a thousand miles, along with a steamroller that had crushed every last bone in my body. I literally thought I was dying.”

Any time she could marshal even the smallest bit of energy, she’d check the internet for information that might help. Eventually, her research brought her to Lyme disease, a condition that was eventually confirmed and treated by Lyme specialists.

She recounts how difficult the treatment was: “I would sweat profusely, soaking my pajamas, the sheets and even the mattress; everything hurt, even my hair, which, by the way, started to fall out. At times it felt as if my head were going to burst, as if there were lead inside of it; my eyes ached in their sockets….the hypersensitivity of my skin was so severe that sometimes I couldn’t even handle the bed sheets.”

Thalia writes that two years of heavy treatment put her “on the road to recovery.” She has changed her lifestyle to incorporate good nutrition, exercise, and stress reduction. She has returned to singing, writing, and other creative pursuits. “I have started to live again.”