Robyn came home from school with a very, very badly stubbed toe. All was wrong in her little world. She couldn’t walk, talk, laugh, at least not until something fun was going on and she forgot  about it. I have to admit it was quite swollen and I could tell it hurt to move.

Once our resident expert got home from work, everyone got into the action. The suggestions ranged from cutting it off, buying a new one, to taping it to the next toe.

As soon as I suggested it, Finley was sure that was the solution, which she was very vehement about. She walked around telling anyone who would listen “We need to tape it.” I wish I could describe the look of importance on her face, eyes open wide, hands up by her face with fingers splayed to emphasize her point. It’s as if a fire had broken out and no one was listening to her as to how to put it out. This was serious. “We need to tape it!” 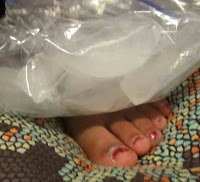 When we finally called the trainer, since she has a meet this weekend and we were a little worried it was broken, the solution was to ice it for 15 mins every hour. She was a little suspicious about this form of treatment, but warmed up to it after seeing her throne.

Charles had her set up with a blanket, pillows under her feet, and a movie.....that’s when she asked for popcorn.


It was amazing how quickly she jumped up from her throne when she got a phone call.

Upon the second stubbing as she ran up the stairs that same night, the crying was doubled. A few seconds later, Robyn’s crying modulated to yelling/crying when attention wasn’t received quickly enough. Then Finley started crying because now her toe hurt, and she wanted to get around Robyn who was dramatically sprawled across the stairs. I don’t know, all I know was we were in a world of hurt.

UPDATE:
A few days later, things were back to normal, for the most part. Unless something didn't go her way.......and then the limping and groaning continued.......